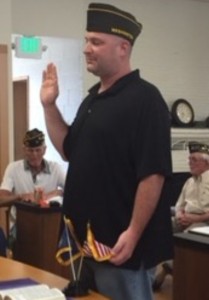 At the August Post meeting, we welcomed yet another comrade to the fold.

He also served in Turkey in 1997 as part of Operation Northern Watch enforcing an Iraq no-fly zone.

Rod was an Avionics Technician and performed training, management and logistic engineer duties.

Awards include the Navy Achievement Medal (4), Navy Good Conduct Medal (6) and Sea Service Deployment Ribbon (2). Rod resides with his wife Maureen in Arlington, WA. They have 4 children. He is currently enrolled in college.