Some of our Vietnam Navy veterans may find this report on the subject of VA benefits for impacts of agent orange on sailors of the “Tonkin Gulf Yacht Club”.

H.R. 299, the Blue Water Navy Vietnam Veterans Act of 2017, as amended, passed the House Committee on Veterans’ Affairs on Tuesday. The VFW-supported bill, which must still be approved by the full House and Senate before going to the president, would restore benefits to thousands of Vietnam veterans, expand inclusive dates to those who served along the Korean DMZ, require VA to report on research related to a broad range of conditions possibly connected to service in Southwest Asia, and benefit children born with spina bifida due to a parent’s exposure to Agent Orange-related herbicides in Thailand. Further, VA will be required to conduct an outreach campaign to those Blue Water Navy sailors who were denied benefits in the past and make retroactive payment of benefits for those previously denied. The vote on this legislation comes 16 years after benefits were lost due to a regulatory change in the Agent Orange Act, and the VFW is proud to have worked with this committee to ensure passage without any cuts to other benefits.

A look at the role of the “Tonkin Gulf Yacht Club” 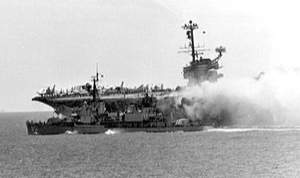 USS Forrestal on fire, the worst US carrier fire since WWII; USS Rupertus (DD-851) maneuvers to within 20 ft (6 m) to use fire hoses.

Fifty years ago this summer, a rocket was accidentally launched from the deck of the aircraft carrier USS Forrestal, which was stationed with its battle group off the coast of North Vietnam. The rocket hit a fuel tank, scattering flaming fuel and setting off bombs and other explosions. Within minutes, flames had engulfed a large swath of the flight deck. By the time the fire was under control, 134 sailors were dead and 161 injured, including John McCain, who was hit by shrapnel as he

The Forrestal fire is a reminder of the significant, but often overlooked, role that the Navy played in the Vietnam War. More than 1.8 million sailors served; of which, 1,631 were killed and 4,178 wounded. The Navy was there at the war’s beginning and at its very end in 1975, when American ships received helicopters carrying embassy staff and refugees fleeing the fall of Saigon. While the aircraft carriers operated far offshore, thousands of sailors plied South Vietnam’s rivers, carrying supplies, interrupting smugglers and inserting Army and Special Forces units into combat zones. Well armed but poorly armored River Patrol Boat crews incurred annual casualty rates of up to 75 percent.

Though they didn’t know it at the time, those sailors — in both the brown-water and blue-water navies — were also being exposed to Agent Orange. As a result, thousands of men who never set foot in Vietnam have nevertheless suffered the effects of that herbicide. (ed. Note: “Brown Water Navy” casualties were reduced dramatically, following the increased use of “Agent Orange” to clear the river banks of dense vegetation, with of course, subsequent disastrous side effects.)

These men have been fighting for years for the government to recognize their claims. In 2002, the Department of Veterans Affairs ruled that to receive benefits for Agent Orange exposure, claimants had to have served on dry land or inland rivers — a remarkably narrow interpretation of “service in the Republic of Vietnam.” (This year a bipartisan group in Congress introduced the Blue Water Navy Vietnam Veterans Act of 2017 to extend benefits to sailors who served in harbors and coastal waterways.)

But even when sailors qualify, there is often a bias against them — an assumption that because they served on a ship or a boat, they couldn’t possibly have suffered the physical or mental consequences of serving in a war. Evaluators assume that being on the water makes you invincible. Tell that to the men who served on the Forrestal.