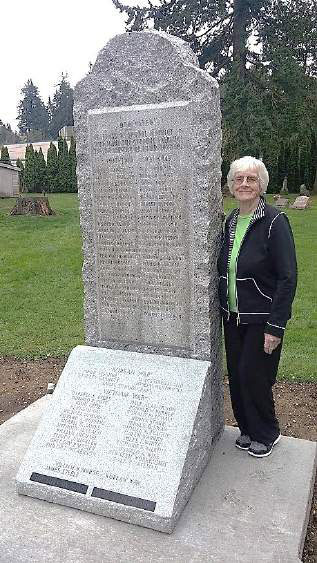 The aurthor at the monument March 2018 (Photo by Marilyn Courtade)

from Betty Gaeng’s Article in My Edmonds News

Just in time to celebrate its 70th anniversary, the South Snohomish County veterans memorial monument has found a new home. The memorial had its beginning in the spring of 1948. With its move this month from downtown Edmonds, the memorial monument is now located at the Edmonds Memorial Cemetery and Columbarium, 820 15th St. S.W. in the Westgate area — its fourth home.

The memorial monument’s first home was on land the American Legion Post owned on the east side of Highway 99 at approximately 181st Street Southwest where it intersects with today’s 52nd Avenue West. The 7- foot-tall granite monument was dedicated there on Memorial Day of 1948. For the next few years Memorial Day ceremonies continued to be held next to the memorial monument. Often American Legion Post 90 was joined by local Veterans of Foreign War Post 1040 and Edmonds Frank Freese Post 66 of the American Legion. However, the location next to a major highway was found to be unsuitable, and each year fewer people attended the ceremonies. 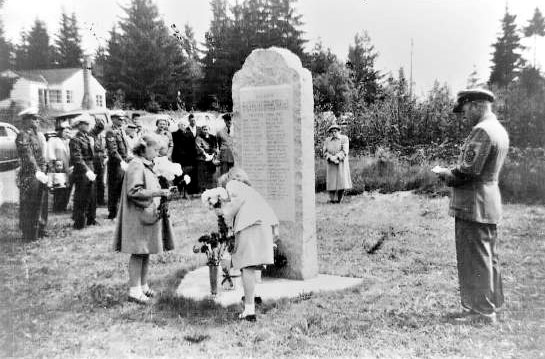 Memorial Day 1954 at the orginal site on Hwy 99 Article and Photos courtesy MyEdmondsNews.com

In 1982, then American Legion Post 66 Commander John W. (Bill) Crump, a WWII Army Air Corps pilot, took the lead in a project to save the memorial by having it moved to to its third home in front of the Edmonds Historical Museum at 118 5th Ave. N. in downtown Edmonds. For me personally, having written a book about the history of the monument and the young men whose names are etched in the stone, and as a member of the board for the Edmonds Memorial Cemetery, I feel honored to have been able to help with locating a new home for the memorial. In addition, like Legion Commander Bill Crump, I also attended school with some of the young men from WWII; and in addition, 70 years ago, I was familiar with the very beginning of this memorial to our valiant young men.