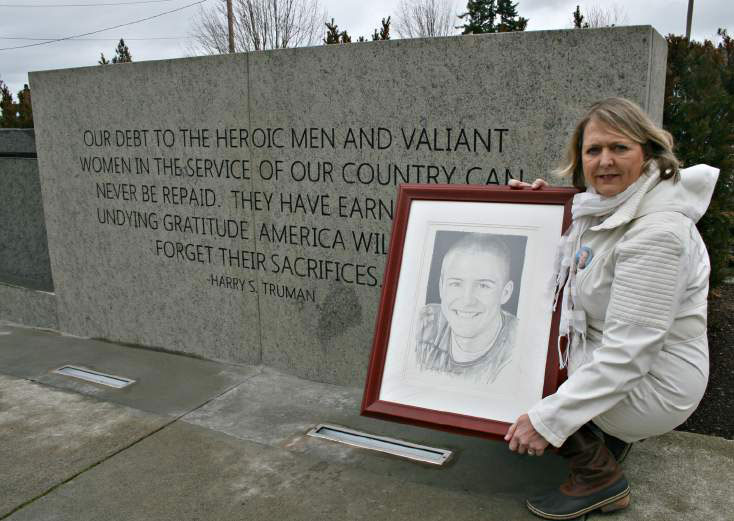 Eric Levi Ward may be gone, but his legacy and spirit lives on with his mother, Monica McNeal. She is president of the Washington state chapter of American Gold Star Mothers, a nonprofit organization that no one would willingly want to be part of. Its members share one thing in common – the death of a son or daughter serving in the armed forces.

If you attended the Veterans Day ceremony at the Edmonds Veterans Plaza, you may have spotted the 57- year-old, who relocated to Edmonds recently. She was hard to miss, as she and other members, dressed head-to-toe in their traditional white uniforms, handed out commemorative pins to all Vietnam War veterans.

After Eric Ward graduated from Mount Si High School in Snoqualmie in 2008, he promised his mother he’d go to college.

But first, he told her, he felt he had to serve as a Marine grunt and work his way up to officer. McNeal understood his motivation. After all, he would be a fourth-generation Marine, following in his father, grandfather and great-grandfather’s footsteps. “I reminded him that we have a war going on, and he said, ‘Mom, I know, that’s why I have to go.’ So he had that DNA to serve.”

Since he lived west of the Mississippi, Eric was due to attend boot camp at Camp Pendleton in Southern California. But he insisted on training on the East Coast, as his father Steven did. “He was able to pull some strings and attend boot camp at Parris Island,” McNeal said, referring to the Marine recruit depot in South Carolina.

“From the day he graduated from boot camp to the day he was killed, he was a Marine for 16 months,” McNeal said.

Her eyes grow moist as she recalls that terrible day.

“He was on a convoy mission when one of the Humvee broke down. Everyone had to get out of their vehicles and secure the area. But then a sandstorm came, and Eric and his friend Adam Peak went to a building to get away from the storm. At that point, Eric stepped on an IED.”