Last Friday, Sept. 11, 2020 marked the 19th anniversary of the terrorist attacks that changed America forever. The memories of that day are still vivid and raw in our nation’s heart, but the heroism that emerged from the rubble of the World Trade Center, the Pentagon, and in the air above a rural Pennsylvania field, should inspire Americans for generations to come. As we remember 9/11 and the nearly 3,000 innocent lives lost that terrible day, the VFW and Edmonds Post 8870, hope all Americans pause and reflect on those we lost and those who continue to sacrifice in the defense of freedom.

As time has passed, an entire generation of Americans has been born and grown nearly to adulthood who have no memory of that day. It is the duty of those of us who do remember to ensure that it is not forgotten.

Because of the Covid pandemic, our annual gathering at the Edmonds downtown fire station was substituted with a virtual ceremony. If you missed the virtual memorial ceremony, which was broadcast on Facebook, follow this link to view the recorded event: https://www.facebook.com/SouthCountyFire/videos/876484326218929

Forty seven years ago I was serving as a Fleet Marine Corpsman with Bravo Co., 3rd Recon Bn., 3rd Marine Division. When my generation came home it was to a nation that was severely divided over the war and we often found ourselves rejected by former friends, belittled, even despised by many because of our service in Vietnam. Those who were vehemently against the war either could not, or would not, separate the warriors from the politics of the war.

We, of course, had our own issues, suffering, as so many of us were, from the various symptoms of what would later be recognized as PTSD. Our families, too, struggled to understand our angers, our silences, our restlessness. As a result, we learned to keep all of that “stuff” inside, shoving it into the background as best we could. In time, most of us just found ways to go on and to succeed in our lives.

As a result of that time in our country’s history, we never felt the important psychological experience of being “welcomed home.” Vietnam veterans, on meeting each other for the first time, even these many years after the war, will often say “welcome home” to one another. It means that much. It is that important.

Our service, which was honorable and done with great courage and skill, was never recognized, or respected in the way it had been for veterans from other wars. Time, though, and the terrible events of September 11, 2001, brought about a change in the general attitude of society toward the men and women of the modern all-volunteer military. Now, even if people disagree with the wars, they have been able (for the most part) to separate the warriors from the war and to give them the honor and the respect they are due. We Vietnam veterans are profoundly happy to see these men and women who have served in Iraq and Afghanistan coming home to warm welcomes and getting positive coverage by the media. In a strange sort of way this new attitude toward the toward the warriors coming home from Iraq and Afghanistan has come to encompass the warriors of my generation too.

I experienced a personal example of this change in attitude this past April 28th, in Spokane, Washington, forty seven years after I came home from Vietnam. I was a veteran chosen to be honored at Washington Secondary School Athletic Administrators Association (WASSAAA) annual conference in Spokane in 2015. The conference also invited my siblings to be in attendance and to participate in this event. For the past five years, the WASSAAA conference has included the honoring of a military veteran in their program. It has become an important part of their annual conference. The people involved with WASSAAA are hard working and dedicated to the daily struggle of molding young student athletes in middle schools and secondary schools all across the state of Washington. Having met them, I can tell you that they do it with love, joy, and good humor as well. 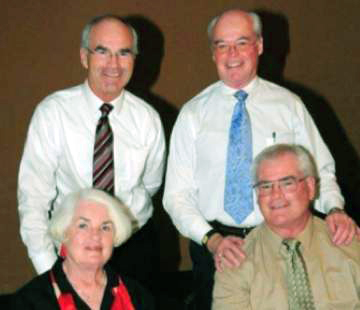 Dan, with his brothers and sister

The welcome and the respect that these folks have for our military veterans is both genuine and warm. When I was introduced at the conference dinner event, a nine minute film interview done with me last year by U.S.A. Military Medals (USAMM) was shown, after which I was overwhelmed by the standing ovation I was given. It moved me very deeply. In fact I can say that now I know what it feels like to be “welcomed Dan, with his brothers and sister home.”