Tag Archive: American History: Our Hope for the Future

VFW Post 8870 and Auxiliary > American History: Our Hope for the Future

2018 Youth Essay Winners and Runners Up 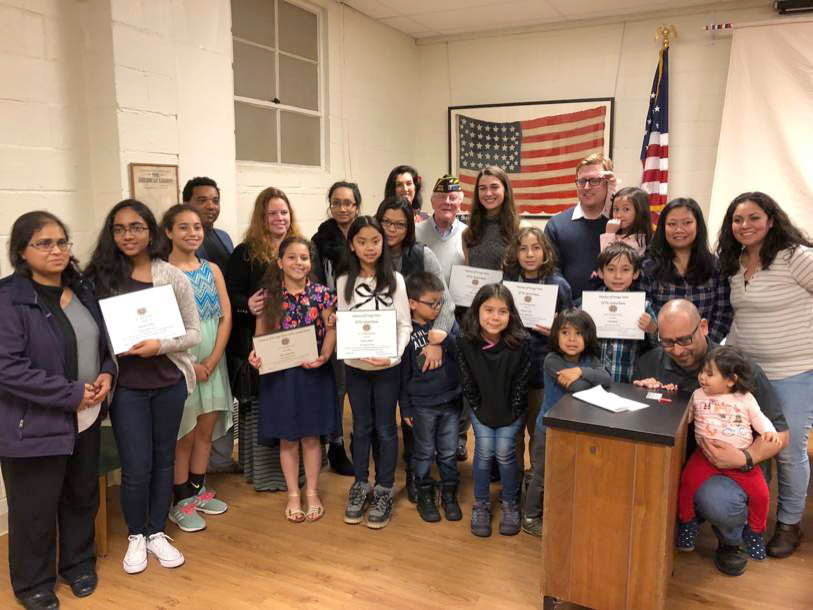 Winners and their families pose with Commander Mike Denton following the award ceremony. The winners are displaying certificates.

The theme for this year’s elementary school contest was “What Does a Veteran Mean to Me?” The contest was open to all public, private, and home-schooled elementary school students in the Edmonds and Mukilteo school districts in grades 3, 4, and 5. Winners advanced to district competition, culminating at the state level.

Edmonds-Woodway senior Olivia Olson once again took 1st place honors in both the local and district Voice of Democracy contest. While two contests for younger students requires a written essay, the Voice of Democracy is an oral competition requiring the submission of an audio recording. This year’s topic was “American History: Our Hope for the Future.” (See accompanying story on Olivia.) Lara Wahid of Kamiak High School was runner-up.

All winners received framed certificates and cash prizes of $100 for first place and $50 for the runners-up.

America’s Gift to My Generation, American History: Our Hope for the Future, patriots pen, voice of democracy, What Does a Veteran Mean to Me? 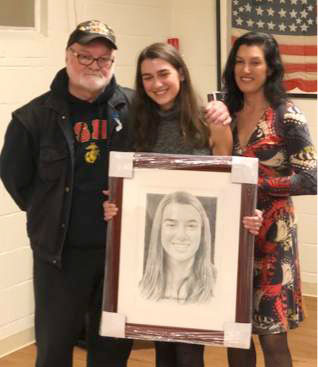 Olivia Olson had just delivered her moving Voice of Democracy speech—she had won first place for an unprecedented fifth consecutive time and—although she didn’t know it—renowned Edmonds artist Michael Reagan was about to present her with the surprise of a lifetime.

Reagan is known for his remarkably lifelike pencil drawings of what he calls Fallen Heroes. His drawings have numbered in the thousands, though seldom has he done such a portrait for a living person. For him to do so, the individual would have to be exceptional indeed.

Those who have heard Olivia Olson speak know that she is not only exceptional, but mature and talented well beyond her 17 years. This year’s essay, entitled American History: Our Hope for the Future, was, in the opinion of the contest judges, her best yet.

When she completed her speech—all completely memorized and without notes—the crowd gave her a standing ovation. Then Michael Reagan unexpectedly came forward bearing a large discreetly wrapped package.

The usually unperturbable Olivia was clearly bewildered at what was happening. Reagan showed copies of several military young women, now dead, whose portraits he had drawn, and said how consistently moved he was at Olivia’s grasp of the meaning of patriotism and sacrifices such as these. He then unveiled a stunning portrait of Olivia and presented it to her as his personal tribute.

She looked over her left shoulder at her mother with an expression that wordlessly said Mom, what is happening? Then, fighting back tears but with a smile on her face she accepted the large framed picture. She stared at it for a moment, handed it to her mom and embraced Reagan for what seemed like a full minute. There was not a dry eye in the place, including the eyes of Michael Reagan.