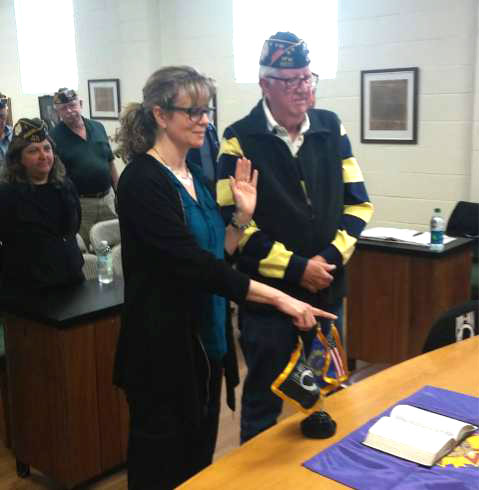 Sara Brannan an E4 Army veteran who served in Desert Storm and the Gulf War. Sara is transferring from another Post and is also a life member of VFW. She has four children and is a school teacher. Cdr. Crabtree swore Sara into the post and members gave her a round of applause.

Sara is shown at left with Officer of the Day Jim Collins.

Steve is shown being welcomed into the Post by Commander Terry Crabtree. A Vietnam veteran, Steve was a MAT team advisor embedded with the “ruff-puffs” in II Corp. 1970-1971. 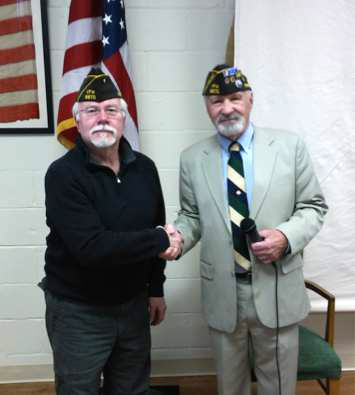 Steve told us: “ I was in the Army for five and a half years and made Captain when I left Viet Nam in April, 1971. Finished up in Baumholder, Germany after eighteen more months as Company commander with the 268 Armor BN. I’ve worked the aviation Industry for nearly forty years-Currently own my own machine shop and am still working-part time with my son. Been married for 44 years and have a son, daughter and teenage granddaughter. My wife was also in the military (1Lt) when we got married after I came home from Nam. We’ve lived peacefully in Mill Creek for the past 30 years. “ 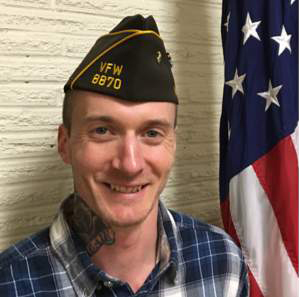 Nick is originally from Boise, ID and joined the Marines there in 2001. He served until 2005. He completed two tours with the 1st Force Service Support Group during the initial invasion of Iraq and later was stationed at the MEK Compound in Fallujah. He received two Meritorious Promotions to Lance Corporal and Corporal. Awards include the Good Conduct Medal and Sea Service Deployment Ribbon (2). Nick works as a mechanic and plans to attend Seattle Maritime Academy, QMED program. He is an active hiker, climber, skier and part time yoga instructor. His dream is to own a yacht. Nick and fiancé Paula reside in Edmonds. 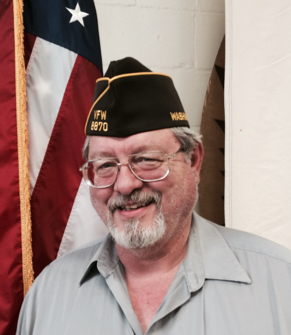 Dan is from Bellevue, WA. He served in the Navy 1966-1970. He was an Engineman 3rd Class and was onboard the USS Oriskany CVA-34 at Yankee Station off Vietnam and later aboard riverboats in Qui Nhon and the Delta 1967-69. Awards include the Combat Action Ribbon and Navy Unit Commendation. Dan is a cabinetmaker. He and Mandy reside in Edmonds and have 2 children and 2.9 grandchildren. Dan is a member of the Vietnam Veterans of America and American Legion Post 66. 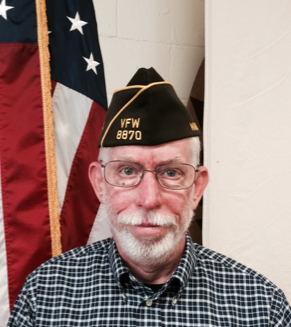 Jim is from Lynnwood and joined the Army June 1969 and served until Feb 1972. He served in Vietnam as a flight engineer for a CH-54 Skycrane Nov 70 – Nov 71. His unit, the 159th ASH Bn, was part of the 101st Airborne Div in Phu Bai and later the 1st Aviation Brigade. He had a 5-week TDY tour Udorn, Thailand as part of secret operations. Jim’s awards include the Air Medal and Aircraft Crewman Badge. Jim has a BS in Aviation Maintenance Management and is a retired aircraft mechanic and manufacturing engineer. He and wife Seokke reside in Lynnwood. Jim enjoys motorcycle touring on his BMW. 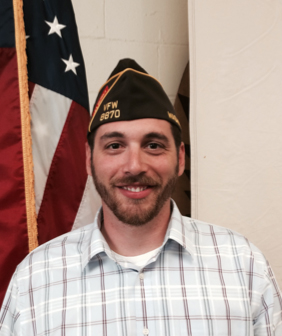 Aaron, an Edmonds native, enlisted in the Army March 2004. He trained as an artilleryman. He served with the 2nd Infantry Div in Korea 2004-5. He was with the 3rd Infantry Division in two separate tours in Iraq during the period 2005-08. His 1st tour, Aaron was engaged at Tikrit providing artillery fire support. His 2nd tour he became an infantryman at Ramadi and Fallujah. A 3rd tour in Iraq 2009-10, Aaron was with the 17th Fires Brigade. He was again in an infantry role in Basra and helped train Iraqi Army and police personnel. His last assignment stateside was at JBLM 2010-11 with the 17th Fires Brigade. Awards include the Army Commendation Medal (3rd award), the Army Achievement Medal (5th award) and the Good Conduct Medal. He is a member of the local DAV chapter. Aaron is a Financial Planner and resides in Edmonds.