On January 20th, the Edmonds City Council approved our design concept for Veterans Plaza. Above is the Memorial Wall with waterfalls segmenting a granite wall. Each segment will feature a branch of the service. Below is an aerial view of the Plaza, the wall separating the parking lot from the Plaza. The large green area in the lower left will be the Memorial Garden with a circular seating area. In the plaza itself, the round objects are existing trees with seating provided on granite cubes interspersed through the Plaza. The committee recommending this design included Jim Blossey, Post Commander, and Ron Clyborne and Jim Traner of Post 8870. Ron and Jim are also members of American Legion Post 66. The design was selected from a number of submissions of ideas from around the country and even one from Mexico. SiteWorkshop of Seattle was chosen unanimously by the committee who has been meeting since last summer. Other committee members were from the community and included a wide representation of various interests. 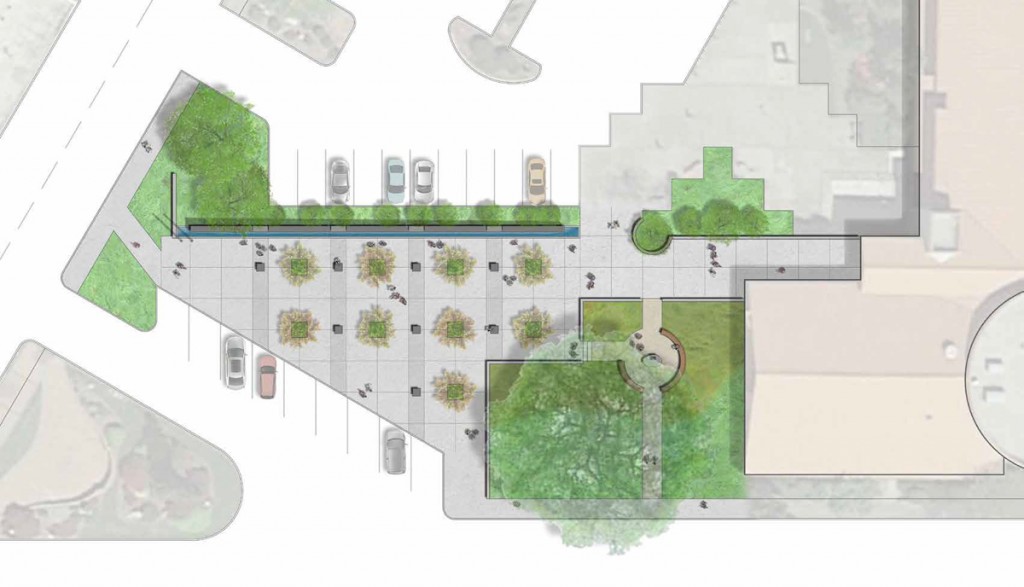 The article below was published on July 25th in the local newspapers. As you know, we dedicated the Plaza on Memorial Day this year. The hard part is coming up, design, fund raising, and completion. Everyone in the Post will have to help with one or more aspects of the project.

Edmonds Post 8870 of the Veterans of Foreign Wars (VFW) of America is partnering with the City of Edmonds to hold an open design competition for the future Edmonds Veterans Plaza in downtown Edmonds.

The VFW Plaza Committee decided to conduct an open design competition to promote local participation and pride in the new memorial, which will be located next to the Public Safety Complex at 250 5th Ave. N. in downtown Edmonds.

“Edmonds is one of the few cities of its size without a tribute or memorial to veterans,” said Ron Clyborne, VFW member and Veterans Plaza committee member. “The plaza is meant to reflect the bravery, sacrifice and strength of the service members who will be recognized and remembered in this special spot in Edmonds.”
The City of Edmonds dedicated the future Edmonds Veterans Plaza on Memorial Day, May 26, 2014. Edmonds City Council member Strom Peterson, a member of the volunteer committee, spoke at the dedication and worked with the committee to establish the open design process.

“The citizens of Edmonds are grateful for all who have served our country,’ Peterson said. “A great way for our local community to feel a part of this special tribute is to create an open and collaborative process with the public in the design of the Edmonds Veterans Plaza.”

The design competition will be open to individuals and groups, students and professionals. You can download the guidelines here or can request a copy by sending an email to edmondsveteransplaza@gmail.com. Preliminary designs will be reviewed and selected by the VFW committee and then go through a formal design and approval process with the City of Edmonds.