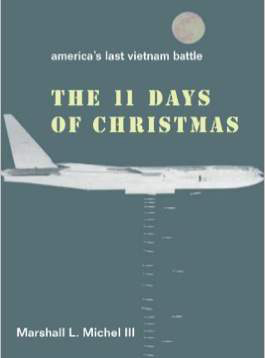 To many, it was referred to as the Christmas Bombings. Officially, the operation was called Linebacker II.

By December 1972, the Paris Peace Talks had fallen apart, and to most Americans, the war had already been
lost. Despite the opposition of the Strategic Air Command (SAC) and Congress, President Nixon ordered the massive bombing of target complexes in and around Hanoi and Haiphong. The air battle would mark the first time that SAC’s giant B-52 long-range bombers would bomb targets so far to the north.

In the previous eight years, B-52’s had routinely flown “Arc Light” missions in relatively low threat environments to interdict the Ho Chi Minh Trail complexes. During Linebacker II, our B-52 force proved shockingly vulnerable to the Soviet built Guideline surface-to-air missiles (SAM). Also revealed in the book is an objective discussion of SAC’s planning errors that resulted in the significant loss of American crewmen and B-52’s.

After Day 2 of the 11 day bombing campaign and despite the threat of court-martial, many pilots ignored some of the non-sensical planning orders to improve mission success and survivability. Nevertheless, Linebacker II resulted in staggering losses.

The author is a retired Air Force pilot who served multiple tours in Vietnam, flying F-4’s. The book has been meticulously researched, and its riveting account of Linebacker II holds the reader’s attention.

“From the Bookshelf” will be a recurring series of book reviews that will appear in the
VFW Post #8870 newsletter from time to time. This review was written by Fred Apgar. 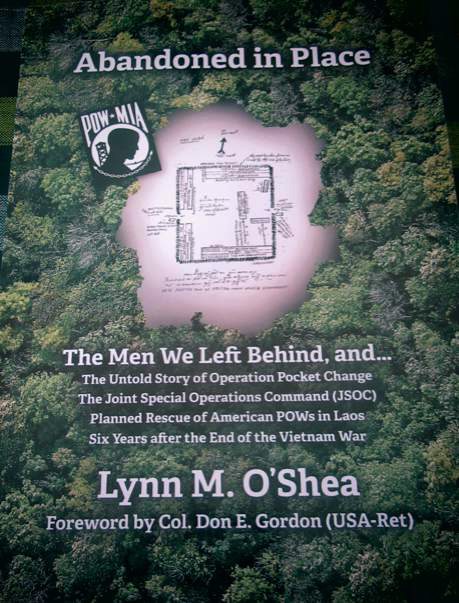 Probably few people have ever heard of Lynn O’Shea. Lynn devoted much of her adult life as an advocate for families of United States servicemen missing and unaccounted for from the Vietnam War. At the time of her death, Lynn served as the Director of Research for the National Alliance of Families for the Return of America’s Servicemen. This organization is the only national POW/MIA advocacy group that represents families from all past conflicts.

Ever since the end of America’s involvement in the Vietnam War, a question has lingered. Did the United States government, either knowingly or unwittingly, abandon members of our Armed Forces to prison camps in Southeast Asia after the Vietnam War? Lynn was not related to a POW or MIA serviceman. Instead she took an interest in the case of Staff Sergeant John Jakovic, whose POW/MIA bracelet she wore. The book, Abandoned in Place is the result of her years of meticulous and tireless research to answer the question.

Lynn assembled an impressive array of documentation on her subject. The material included documents that have been declassified and obtained through the Freedom of Information Act (FOIA) from agencies such as the Joint Special Operations Command (JSOC), National Reconnaissance Office (NRO), Defense Mapping Agency (DMA), and the National Security Council (NSC). Interestingly, the Central Intelligence Agency (CIA), which played a significant role in operations to “investigate” the issue, refused to cooperate. The book has been meticulously footnoted and annotated and includes numerous documents, maps, photographs, and drawings that support the facts she presents regarding the issue of warriors left behind.

There is much in the book that will shock the reader. You will read about:

Thanks to the steadfast efforts of Lynn O’Shea, our nation now has a much clearer understanding of how and why the U.S. Government left men behind. Abandoned in Place provides the reader with a riveting account of the ineptitude, lies, cover-up, and deceptions made by officials who, seemingly, valued their careers more than the men who were willing to sacrifice their lives for the country they loved.

“From the Bookshelf” will be a recurring series of book reviews that will appear in the VFW Post #8870 newsletter from time to time. This review was written by Fred Apgar.