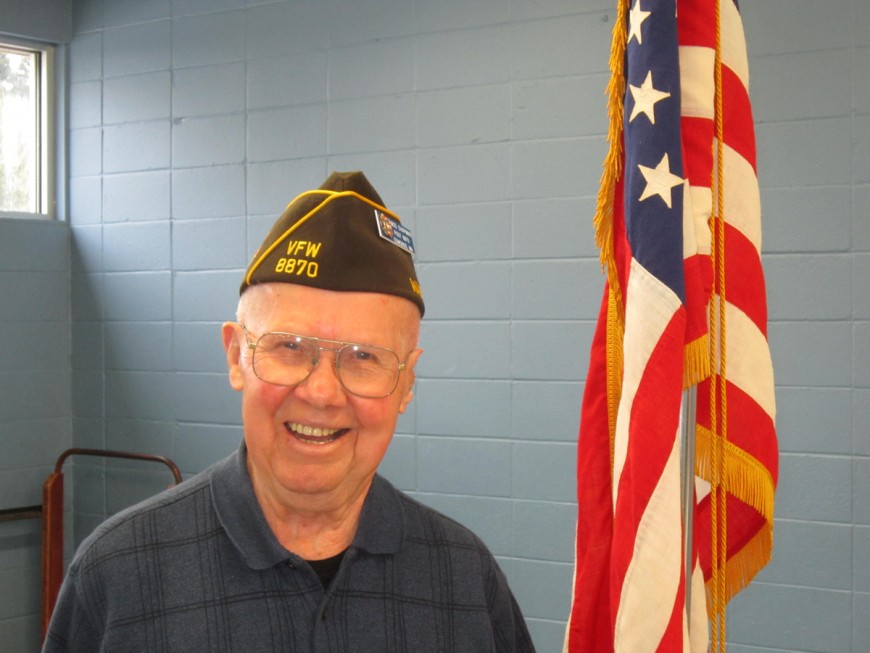 The identity of the member is Harry Miller.

Bio:  Harry dropped out of high school to enlist in the Army.  He arrived in Europe in November of 1944, assigned to the 740th Tank Battalion.  As a crewman in a Sherman Tank, Harry found himself immediately immersed in the Battle of the Bulge.  Following the defeat of the Germans, Harry and his Battalion chased the Germans back across the Siegfried Line.  Harry left Germany in 1948 and was assigned to Gen. MacArthur’s Japan Occupation Headquarters.  When the Army refused to send Harry to Korea, he left the Army and enlisted in the Air Force and his desire to serve in Korea was granted.  During the Vietnam War, Harry was assigned to SAC Headquarters and served as a member of the Joint Targeting Task Force for B-52 operations  in Southeast Asia.  Harry retired as a Senior Master Sergeant after 22 years of service.  While living in Edmonds, Harry was a drummer in a local dance band.  After Helen, his wife of 37 years, died, Harry moved to a Veterans Home in Washington, D.C.

Who Is that Guy—Carl Kurfess

Carl Kurfess is a born and raised Seattle native. He attended Army ROTC at Seattle University and was commissioned a 2nd LT in Infantry in 1983. He attended Infantry Officer Basic Course and Airborne school and was stationed in Germany as a Mechanized Infantry Platoon Leader. He joined theReserves in 1986 in Seattle and served in various Army Reserve Units. He was mobilized for Operationin2003 much to his surprise. He was lured to the dark-side, branch transferred to Civil Affairs and volunteered for and completed four tours in Iraq; 2003-2004 at Camp Victory, 2005-2006 in the Green Zone, 2007-2008 at Camp Victory and 2009-2010 at FOB Warhorse as a Civil Affairs specialist, working with local Iraqi government officials in reconstruction efforts. He retired from the Army Reserves in 2011 with 28 years of service.

It’s Not Tom Cruise—Who is it?

That would be a much younger Sr. Vice Fred Apgar.

Who is this Member?

It’s Not Tom Cruise—Who is it? It’s not John Wayne either, but it is a member who is a Vietnam veteran in our Post. The answer is found below and you’ll be surprised. Click here for the answer.

Who is This Member?

Who is This Good Looking Couple?
The couple left were married shortly after VE Day in England. He was stationed in England prior to participating in the Normandy Invasion as a paratrooper. She, on the other hand, pulled the strings of a 2 star general to make sure he didn’t miss the wedding day. Further on you’ll get the “Rest of the Story” and a picture of them at the last Post meeting. (Excuse the quality of the picture—a copy of a copy I suspect). Click here for the answer.

Who is this Couple? Why Fred and Nancy Dietrich, of course.

Here are the Dietrich’s 62 years later.  Looking good and certainly a delightful couple as anyone who knows them will tell you. Read their story shared at the last meeting.

Who is this Member?

I recently asked for old photos and the gentleman above replied. The picture was taken in Normandy immediately after the invasion. He was 23 and was awarded a battlefield commission. He was XO of his Battery and received a Bronze Star w/ V. He served in 5 campaigns in Europe including the liberation of Paris. He stayed in the Reserves and left the service with the rank of Major. Click here for the answer.

Warren Eddy is back home in Edmonds after 30 years in California  and looking good for a man of 90 (plus?).  He is married with two children, six grandchildren, and one great grandchild.  As footnote, he is a past Commander of an American Legion Post in Southern California.  Thanks for the memories Warren.  Now how about a few more volunteers.