The annual “Edmonds Kind of 4th” Parade returns this year and with it the VFW/American Legion picnic/barbecue following. Transportation will be available for veterans who are unable to walk the parade route and we are looking for a big turnout for this event.

We will meet at 6th & Bell in downtown Edmonds at 11:30am to form up for the parade which starts at 12:00 noon. The parade follows its usual route through downtown Edmonds. We will again hand out small flags along the way.

Following the parade, at 1:00pm we will gather at the Legion Hall for our picnic. The Posts will provide hot dogs and hamburgers, and we ask members attending to bring a side dish/potluck item to share.

Please notify Commander Carl of what you will provide for the picnic, so we know what to expect. (commander@vfw8870.org.) Hopefully, many of you will have signed up at the Post meeting on Wednesday June 15.

A large contingent of VFW and American Legion members participated in the annual “Edmonds Kind of 4th” Parade, stepping off at noon on a beautiful July 4 in downtown Edmonds. Jim Traner arranged for and towed a flat bed trailer equipped with chairs for those who may walk with difficulty, as others marched along behind the colors. 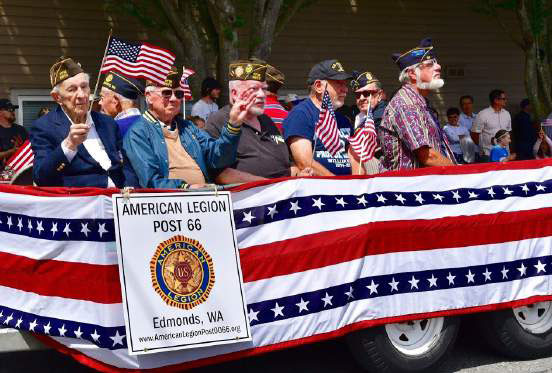 Three of our comrades attending the parade this year celebrate reaching the century mark.

Ed Shepherd (100 on July 4), Don Raliegh and Buck Weaver all will reach that milestone this year. 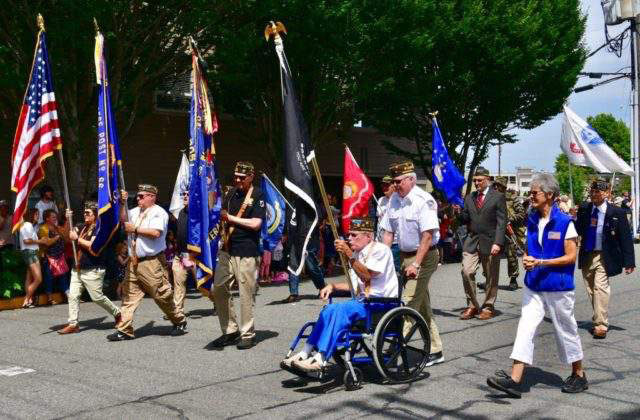 At above, the VFW Post 8870 color guard leads the parade.

Thanks to Dick Simmons for organizing the color guard and to its members for their efforts. Walking a mile and a half with those flags under a warm sun is a bit of work. 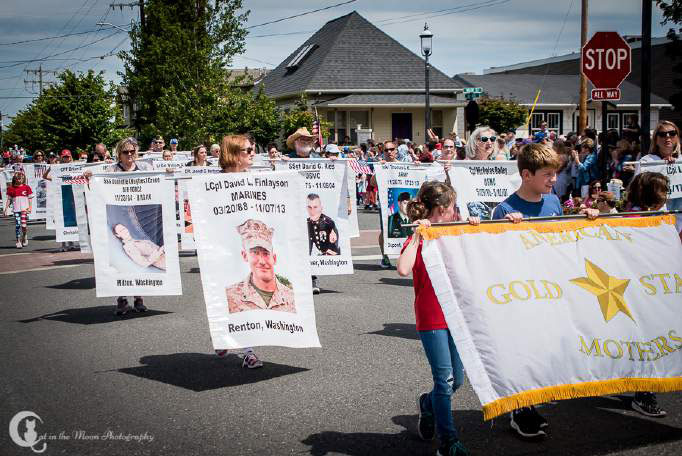 The American Gold Star Mothers brought something new to the parade this year, arranging for banners with the images of theiir fallen loved ones to be carried in the parade.

“I attended with my young family and thought it was the best parade yet (and they are all good!). In particular, I especially enjoyed the group who brought huge pictures of soldiers from our area who had died in service. It was very moving and special and felt patriotic to STAND as they passed and explain to my children why we STAND.

Naturally, we also love the veterans when they go by and stand for them too.” 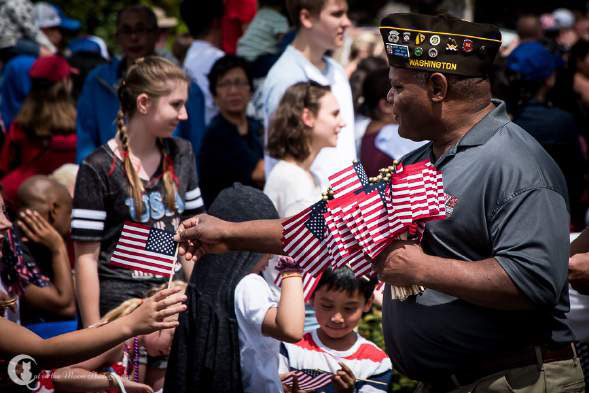 Below, Kerry is joined by Post 8870 Quartermaster Dennis Peterson. 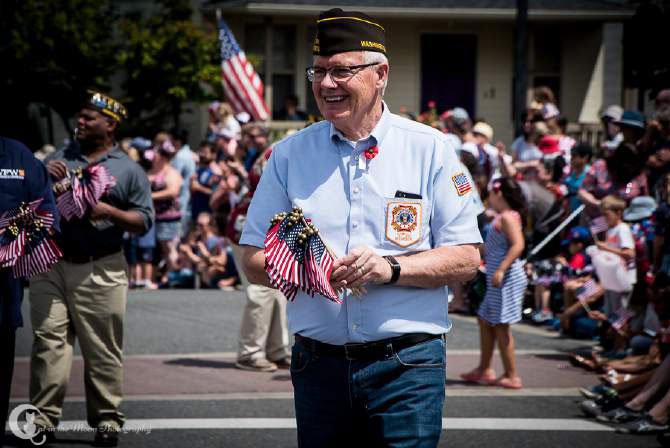 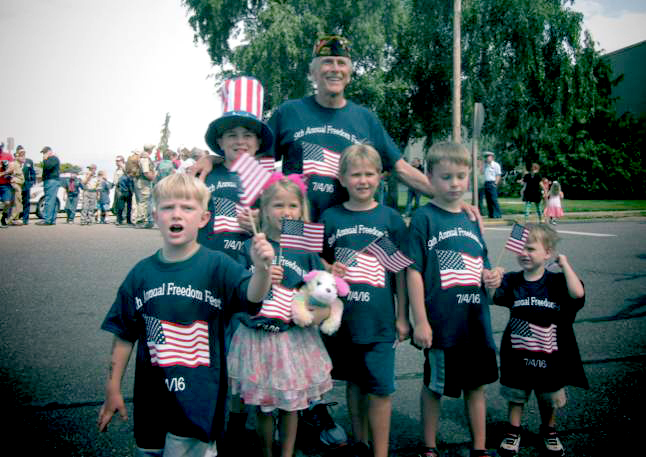 At left are Post Chaplain Fred Apgar and six of his seven grandchildren, suitably attired in matching patriotic T-shirts The kids came all the way from Long Island and Nashville to march in the Parade with Grandpa.

Also, many thanks to Fred for his ongoing support as the stalwart head photographer for our little publication.

Believe it or not, the 4th of July is here again. As in the past, we will be forming up at 6th and Main at 1130 hours and stepping off at 1200. For those of you who haven’t attended the parade, if you wish to park anywhere close to the rally point, you’ll need to be there by 1030 at the latest. We will have the American Legion Hall open so you can have a seat there if you arrive early. This year we will have 4 Jeeps (hopefully) and 3 Humvees so there should be room for all those who wish to ride. The route is .9 miles so a lot of us will walk. Unlike prior years, our annual picnic will be the following day, July 5th. We found that it was too difficult to navigate across town when 10,000 people were leaving at the same time. For those of you who haven’t participated in the past, I would urge you to do so, The crowd loves the veterans and we love the crowd. Be sure to bring your cover.