(From the newsletter of Jim Traner’s Vietnam unit)

When I travel to my local VA hospital for treatment, I see mostly aging Vietnam Veterans in the hallways, but increasingly, I see more recent veterans (male and female) that look almost out of place among the the overwhelming number of veterans of our war.

Our war puts us in a unique position. What we have been and continue going through, puts us in a position to better understand what our recent brothers and sisters (and sons and daughters, ed.) in arms have given and lost in the war on terrorism. We know what they face in trying to gain recognition and compensation for what what they have given. We are all part of an unbroken chain of service to our country that extends back more than 250 years. The challenges of recent veterans are essentially the same challenges we faced.

So, the next time you encounter a more recent veteran, take the time to thank them for their service. (That’s more than we got!). Let them know they are our brothers and sisters and engage them in conversation. Let them know that we understand better than most what they have been through and what they face now that they have come “back to the world”. Tell them and show them that there is life and love after war.

The movie The Lost Battalion has been around for some years (Rick Schroder plays the Major), and I got interested in looking up some facts on it. Most are pointed out in the movie – 554 soldiers attack the Germans in the Meuse-Argonne offensive and 107 are killed, 63 missing, and 190 wounded in the 5 days before they were rescued. Their Commander, Major Whittlesey along with two others received the MOH. Here’s where it gets a bit odd – Whittlesey acted as a pallbearer at the burial of the Unknown Soldier along with Sgt. York on November 1921. A few days later he booked passage on United Fruit Company ship going to Havana. The first night out of New York, he disappeared and was never seen again. He is presumed to have committed suicide by jumping overboard. A number of letters were found in his state room addressed to relatives and family and instructions to the Captain of the ship on dealing with the disposition of his baggage left in his stateroom. A sad story but losing all those men through no fault of his own was probably a heck of burden to carry. Also, I wonder if participating in the Unknown Soldier ceremony triggered something. We will never know.

Reflecting on Christmas Day 1968. Dave’s unit was somewhat newly arrived in Vietnam while I had spent 16 months in country with most of that time in the field. I was what you’d call a seasoned trooper while I knew my brother was in for a steep learning curve as he was in a reserve unit. Today those reserve units are as good as any regular Army units but not so much in 1968. His unit was on the DMZ in I Corp while I was stationed in III Corp with the 11th Armored Cav in the lower 1/3 of Vietnam. I decided to see him for Christmas and got the necessary orders cut. Getting there was a challenge. A Huey ride to somewhere, buying a beer to some aircrew heading North and two days later I arrived after some interesting stops on the way. I got there Christmas morning in time for some of the best chow I’d had in Nam. Christmas dinner there was even better. That unit may have been green but they had the best cooks in Nam. I damn near kidnapped one for our unit. My brother and I headed off to the beach after breakfast. Of course, the temp was probably approaching 100 by 10am, and his unit was stationed near the South China Sea with white sands and warm water. After swimming for a while, I was floating around (literally) when I heard my brother yelling for help. I looked around and saw him several hundred meters offshore with a GI who had ventured too far out and was in the process of drowning. I swam out and took over the life saving duties while he went in for help. He returned with another guy and an air mattress and the 4 of us made it to shore. It was a close call and looking back, we were both minutes from drowning.

Thank goodness we had grown up swimming in rivers and were both strong swimmers. So what do you do for an encore? Well, you find some beer, get a case of M79 grenades, go back to the beach, drink the beer, toss the empties into the surf, and blow them up with the thumper. I think we paced our drinking with our grenades so it came out pretty close. Back to the chow line for a Christmas meal and packing my gear for a 5am departure back to Blackhorse Basecamp. I doubt many can match that Christmas day in 1968 which remains a vivid memory after all these years.

Christmas in Vietnam by Jim Traner 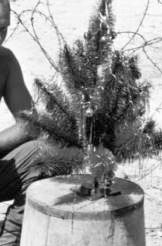 “In 1967 our unit, 1st Squadron of the 11th Armored Cavalry, was dug in for the Christmas truce. We were in a FSB close to the Cambodian border. I won’t give you my thoughts on truces in a war as I would be banned on FB. One of our guys got a very small artificial tree from his family. I’ve been searching my memory as to the trooper but I’m drawing a blank after 50 years. We had no decorations but we did have some Jiffy Pop, carefully hoarded in our track from a stop in Base Camp a few months earlier. After tearing off a chunk of a brick of C-4 (plastic explosive for you civilians), we lit it and popped the Jiffy Pop. Someone had their sewing kit stashed in their gear and we threaded the popcorn and strung it around the tree. Every Christmas I look at our beautiful tree and remember that pathetic little tree that brought Christmas joy to a bunch of GI’s dug into a mountain top far from home.”

Jim posted this piece describing that little “Charlie Brown” Christmas Tree on Facebook recently and it was also published in the Edmonds Beacon. The photo, of different tree in Vietnam, was posted on Facebook around the same time as Jim’s post by another Vietnam vet.

A Report On the 2018 VFW National Convention 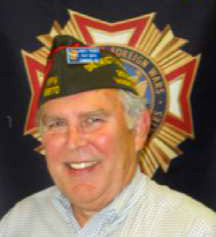 Past Post 8870 and District 1 Commander (Now Dept. of WA Trustee) Jim Traner traveled to the 2018 VFW National Convention in Kansas City a few weeks ago and took the role of speaker for the July Post meeting to report on convention activities. Traner updated the Post on some changes coming to VFW bylaws and reported on the social events of the convention.

Every year, thousands of VFW and Auxiliary delegates gather to represent the organization’s total membership of nearly 1.6 million at the weeklong convention. While there, our mission is to approve new national priorities to guide our organization as we lobby Congress on issues important to the nation’s veterans, service members and their families. Convention delegates also elect new leadership, as well as recognize prominent individuals and organizations for their support of veterans and military personnel. 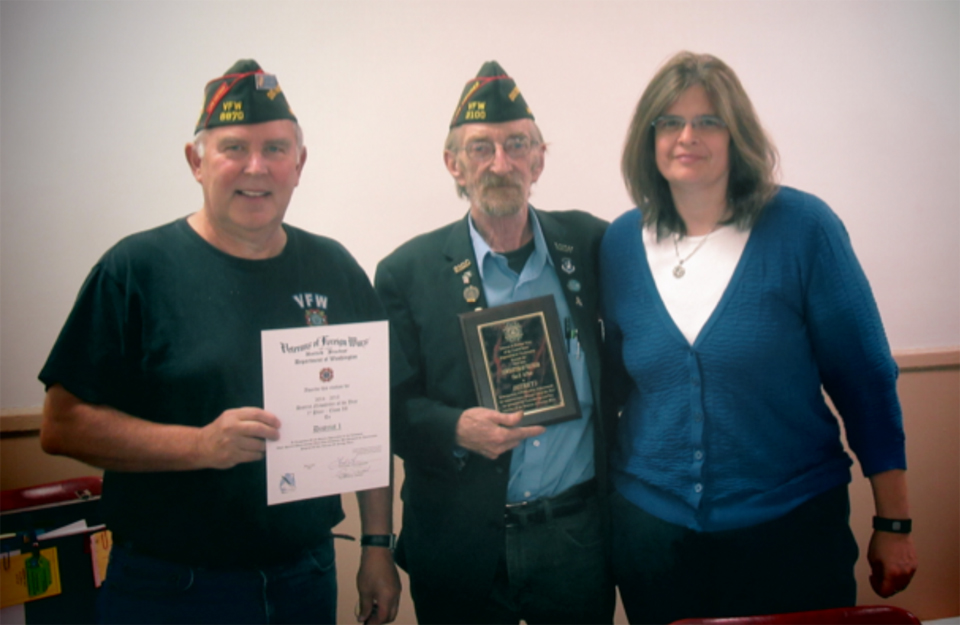 At the District 1 meeting on August 29, 2015, Jim Traner was recognized by the Department for publishing what has been judged to be among the best District newsletters in the state of Washington. A certificate of recognition was presented to Jim by Department Adjutant, Fred Green. Jim served as District 1 Commander for two years, and he is the founder and editor of the award winning newsletter. He has served in that capacity for the past four years and has worked diligently to publish the monthly newsletter.

Jim was elected Post Commander in July 2009 and served in that role for three years. Prior to being elected to that leadership position, he created our Post newsletter, which, since its inception, has also received Department honors. Both the Post and District newsletters are published monthly. 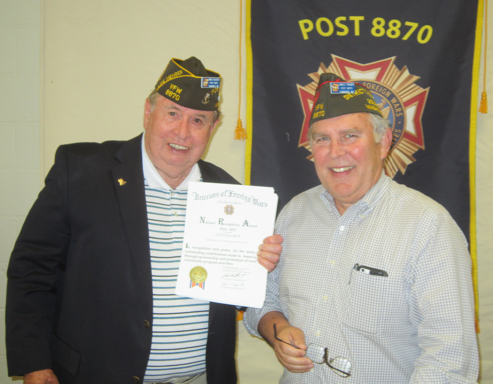 Representing the Department, Past Post and District 1 Commander, Jim Traner made several presentations to Commander Jim Blossey to recognize our Post’s achievements in various VFW programs. The Post newsletter continues to be one of the best in the State of Washington, receiving second place honors. In past years, our newsletter editor, Jim Traner, has been recognized as the best in the state. Post #8870 was recognized for its continual participation in and support of the Patriot’s Pen and Voice of Democracy student essay competition, Scouting program, as well as the teacher recognition program. Our Surgeon, Al Boyett, was recognized for the efficient and timely reporting of our Community Service and Hospital reports, and similar recognition was afforded to Chaplain, Fred Apgar. Finally, our Post was recognized for its continued financial support of the USO at Sea-Tac.

A few days ago I had the privilege of speaking with a class of 5th graders at Mukilteo Elementary School. These 10-year-olds were some of the sharpest young people I have ever met.. They had been studying the U.S. Constitution and their teachers wanted them to meet some actual people who had put their lives on the line to protect the liberties that are so eloquently enumerated in that magnificent document. Past Commanders Fred Apgar and Jim Traner also spoke that day, at different times and—I presume—to different classes.

“If we didn’t have veterans, we wouldn’t have freedom.”

The next day their teachers seny us a few excerpts from the comments the students had written down. Clearly, they were listening. More importantly their words pointed to the content of our remarks, not to us as speakers. They recognized that service, particularly military service, is about real people and—in most cases—people that live right here among us.

“I learned that even 17- and 18-year-olds can make big sacrifices.”

The students identified with the idea that when we served we weren’t much older than them. They wanted to know how we felt at the time and what motivated us to become part of the military. We told the truth—that very few of us joined because we wanted to be patriots. But we also told how every one of us came to realize the importance of what we were doing and that we were fighting, not so much for the vague ideals of freedom and democracy, but for family and loved ones…and for future generations. In other words, for them.

“It’s really special to know someone who fought for our country.”

I’m glad they wrote those words on paper rather than saying them to me in person, because I’m not sure I could have retained my composure. What is important for all of us to know is that this is how most people feel about us. And what I want you to know is how special it is to be able to touch these young people’s hearts.