Every now and then, we run across some interesting photos and narratives of our members’ service history. If you have some pics and narrative of your service you would like to share with our comrades, send it to your editor. We would like to start doing more of this if the membership agrees.

Destroyer sailors currently in the Post, include World War II Veteran and the late Amos Chapman, Past Commanders Jim Blossey & Mike Denton. We expect there are others and would like to hear from you.

Blossey served aboard USS Walton, DD362 in the Korean War and Denton as a reservist aboard USS Whitehurst, DE 634, following active duty on USS Castor AKS, a supply ship supporting carriers off Vietnam. Others of our “Tin Can” shipmates (such as Amos Chapman) are no longer with us. Photos of both ships reflect their Vietnam era configuration, though both date to WWII.

We lost another of our few remaining WWII vets recently, when Amos Chapman died following a stroke. Amos grew up in Toppenish, WA but also lived in Seattle and graduated from Franklin HS. He joined the US Navy in May, 1943, just a couple months before turning 18. He served aboard the USS Killen (DD-593) in the Pacific as a Fire Controller. The Killen was a new destroyer built in Bremerton. It provided convoy escort, shore bombardment and anti-aircraft screen. It participated in action in the Surigao Strait in the campaign to retake the Philippines. The Killen was attacked by 9 Japanese Aircraft off of Leyte and was heavily damaged by a bomb, killing 15 crewmen. (In the photo at left, he displays the medal awarded to US Vets of the Phillippine campaign. At right, Amos is with his ship’s monkey mascot aboard the Killen. Such mascots were not uncommon in the Phillippine operations) Amos resided in Edmonds. He retired from the US Postal Service Seattle. He leaves 3 daughters, 7 grandchildren and 7 great grandchildren.

Edmonds resident and World War II veteran Amos Chapman Jr. recently received the Congressional Gold Medal for his participation in the U. S. Navy during war activities in the Philippines. The medal is the highest honor Congress can bestow on an American.

In a letter that accompanied the medal, Washington’s U.S. Senator Patty Murray lauded Chapman’s contributions, saying “You have demonstrated incredible dedication to our country, and your sacrifices will never be forgotten.” He was one of 28 veterans who received the award, 26 of whom are now deceased, at the event held Oct. 19 at the Mt. Tahoma High School Auditorium in Tacoma.

Amos, now 94 years old, is still an active member of Edmonds American Legion Post 66 and Veterans of Foreign Wars (VFW) Post 8870. The award was given to recognize his service along with his fellow Washington State Filipino and American World War II veterans, according to Murray’s letter.

Amos joined the Navy in May 1943, at the age of 17. He was assigned to serve aboard the Fletcher-Class destroyer, USS Killen, in the Pacific as a Fire Controller. His ship was engaged in the Battles for Leyte Gulf during which the ship was under constant attack by artillery, air and Kamikaze attacks.

When the Japanese Navy decided to contest the landings on Leyte, the Killen’s squadron engaged the enemy at Surigao Strait. On the morning of October 25, 1944, the USS Killen launched five torpedoes toward the Japanese battleship Yamashiro. One hit, slowing the Japanese ship to 5 knots, enabled other American destroyers to maneuver for the destruction of the Yamashiro.

At the August Post meeting we recognized members years of service in the Post with the award of the appropriate lapel pin. Recognition pins are issued in five year increments only. Shown below are those members for whom photos were available from file. Congratulations to all of you!

Benton Webb joined VFW in 1945 and is currently the longest serving member in our post at 72 years. Comrade Webb was overlooked in ordering service pins, but we now have a 70 year pin on order. Congratulations Benton! 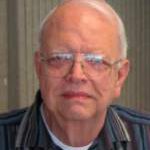 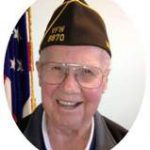 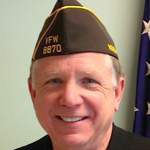 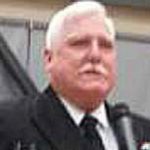 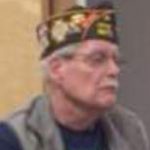 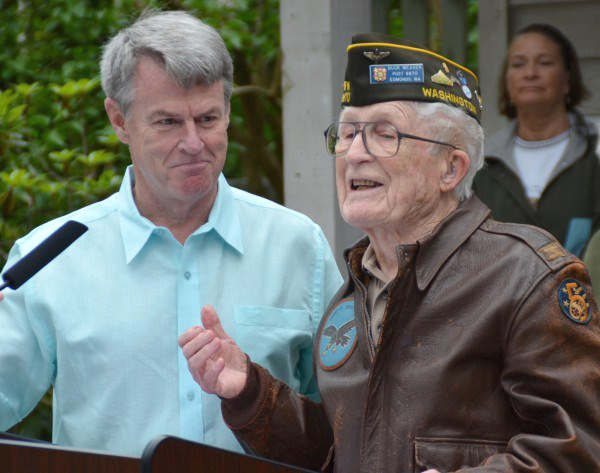 Our own Col Buck Weaver was the honored guest at this year’s Memorial Day ceremony at the Edmonds Cemetery. This year’s theme was VJ Day. Fred Apgar described the origin and meaning of the White Table, now a fixture in every veterans’ organization banquet and meeting place. 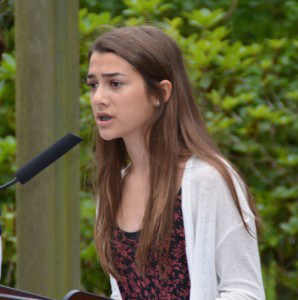 Olivia Olson, winner of our Voice of Democracy Contest, recited in grand style her award winning essay about why our country should honor its veterans. She was outstanding.

Finally, Amos Chapman and Neal Goldstein read the list of names and rang the ship’s bell for those Snohomish County residents who were killed in the Pacific Theatre in WWII. I estimate there were approximately 300 hardy souls at the ceremony who braved a slightly chilly day.