Ron Clyborne, a Vietnam veteran, spoke about the efforts to create the memorial plaza dedicated to veterans, starting with a vision nine years ago followed by planning, fundraising and construction. Edmonds’ Veterans Plaza officially opened on Memorial Day 2017.

In her remarks, Edmonds City Council President and U.S. Air Force veteran Vivian Olson pointed to the myriad heroes giving back to Edmonds every day through arts, charities and service. She also spoke about the fragility of democracy, underscored by the current conflict in Ukraine.

Edmonds Mayor Mike Nelson offered thanks to those attending for their service.

At the end of the event, Vietnam veterans Mike Reagan — founder of the Fallen Heroes Project — and Duane Bowman distributed pins to families of those veterans whose loved ones came home from Vietnam, and buttons to those Vietnam vets who served when called to duty.

Saturday, May 7 is VFW National Day of Service. At the March Staff meeting, it was decided that our service will be a beach clean up at the Marina Beach Park on the Edmonds waterfront. We will commence at 0900 and should wrap up well before noon. Please join us for this community service event. Family and friends are welcome to help.

Following the VFW Day of Service event, all are invited to a Birthday Open House for Mike Reagan’s 75th Birthday, at the American Legion Hall, from 3:00 to 6:00 pm!

The host of this event is the Washington State Gold Star Mothers. Stop by for cake and to wish Mike a Happy Birthday!

Our Other New Member

Turned out that a friend of his bought it from the owner and it’s been sitting in that person’s garage since. The buyer’s wife wanted it gone so my “Bug Guy” took it off his hands. So he called me a couple of weeks ago, & offered it to me and I accepted, with the idea this is an “Veteran Icon” of our area and that it needs to be saved from the garbage heap and at the last meeting brought it down to the Post, maybe its last home. I think it’s valuable and with some thought I believe we at the Post could find a way to make it pay off with the work we do. It’s easy to move around and it does get attention.

From the Bookshelf: More on “They were Soldiers”

In the last issue of this newsletter, we published a brief review of Joseph Galloway’s recent book, “They Were Soldiers”, a follow-on to his earlier “They Were Soldiers Once – and Young” in which Galloway tracks his earlier subject’s post war lives, including their careers and their challenges in dealing with leaving the war in Vietnam. It is a well written book, some of which may be difficult reading for combat veterans, for that matter it isn’t easy to read period, but it tells a great story of some great Americans and is well worth your time.

The book is divided into four parts covering quasi related career paths of these veterans. Part One is called “Artists and Professionals” and the reason for this follow-on article is Chapter 8, titled Michael Reagan… yes, that Reagan, our very own Marine artist in residence.

Most of us in Post 8870 have heard Mike tell the story of how Vincent Santaniello died in his arms in Vietnam in 1968, the event that lives in him every day and is the inspiration for his ongoing Fallen Heroes Project, which, last we heard, had produced in the neighborhood of 7,000 portraits of those heroes for their loved ones. Galloway describes Mike’s return home from the war, the path he took to his long career at the University of Washington, and on into “retirement” and this second career that is his daily life and that has proven his salvation.

Read Mike’s story for yourself. (Oh, and the rest of them too) Makes us proud to call him friend and comrade.

At a November meeting of the Edmonds City Council, Mayor Dave Earling was presented with his portrait by Fallen Heroes Project artist Mike Reagan, in recognition of his work in support of the Edmonds Veterans Plaza. Earling will end his service as Mayor in January of 2020 after serving two full terms.

The backing and support of the City and its leaders has been invaluable to the completion of the Plaza.

At the July Post meeting, former City of Edmonds Parks, Recreation and Cultural Services Director Carrie Hite was honored for her enormous contribution to the development and completion of our Edmonds Veterans Plaza.

Plaza Committee Chair Ron Clyborne spoke of Hite’s contributions to the project, recognizing the essential nature of her part in its completion. While Hite recently resigned from the Edmonds position to assume a similar role in the City of Redmond, the Edmonds Veterans Plaza will surely stand as a highly visible symbol of her legacy to the city. She had served the City of Edmonds since 2012.

The Post and all Edmonds veterans and their families are indeed grateful.

Some Thoughts from Mike Reagan

I listen to a lot of music and books and choose those that tell me a story. That is what I try to do with my art and my posts. I believe that while I work with the fallen I bring them back for a period of time as I draw. I try and listen to them all, even the animals. If you were to take any of my drawings, like Apollo and follow up on the image you would find a story, a sometimes sad, but always fantastic story about a Hero. I live in these more then 6000 stories and have for 15 years.

I truly believe that these people visit my drawing board and so I write things on my board as I work and as they come to me. I read one of those before I came up to write this:

Life has 2 realities: The one most of us understand, where we can see, hear, smell and touch it. Then there is the one where we need to just believe. That ability takes trauma to achieve. You learn to believe because you have to, to hold on to whatever you lost that you loved the most. Once I draw a portrait of the fallen they become a part of me. I have become part of a lot of wonderful individuals who I believe died for me.

An excerpt of some thoughts by Mike Reagan

I believe that while I work with the fallen I bring them back for a period of time as I draw. I try to listen to them, even the animals.

A Gold Star family once asked me why I wanted to linger in all of your grief. I answered I wasn’t, I am spending time in your love. If you were to take any of my posts, like Apollo and follow up on the image you would find a fantastic story, sometimes sad, but a nonetheless fantastic story about a Hero. I live in these more then 6000 stories and have for 15 years. While its impossible for me to explain how I feel love for every single fallen hero I draw, the families see it in the result.

Life has 2 realities. The one most of us understand, where we can see, hear, smell and touch it. and the one that we need to learn to just believe, where we can’t do any of those above things. That ability takes trauma to achieve. You learn to believe because you have to, to hold on to whatever you lost that you loved the most. Once I draw a portrait of the fallen they become a part of me. I am a part of a lot of wonderful individuals and animals, who I believe died for me. Never Forget.

United States Volunteers – Joint Services command presented VFW Post 8870 member Mike Reagan with an appointment as “HONORARY COLONEL” at a ceremony held January 19 in Lynnwood, in recognition of his ‘exemplary Service’ to the United States military community through the “Fallen Heroes” project.

The USV-JSC is an organization focused on Augmenting the Regular and Reserve forces in two areas. First, to provide trained, uniformed volunteers who may be called upon to render final military honors to deceased veterans and second to fill the gap when and where needed by proper authority in incidents of civil emergency management. 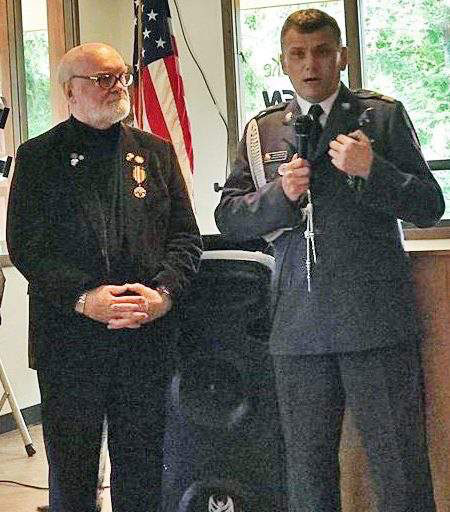 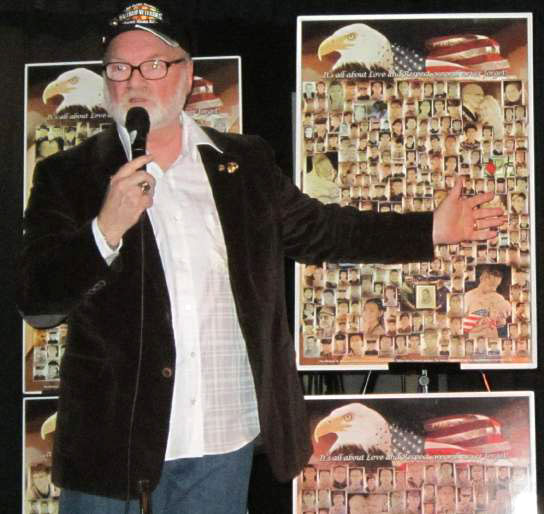 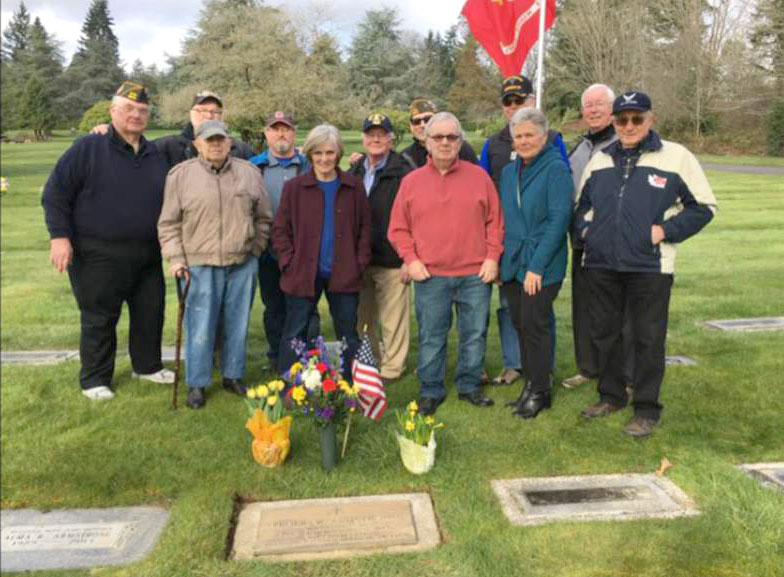 Reagan: “50 years ago today (March 28) in Vietnam, I was with Peder Armstrong and Vincent Santaniello as they died. You know the story. Vinny is buried near Queens NY, Peder is buried near where I live. (Acacia Memorial Park, Shoreline) A group of people visited each site this morning. This is the group at Peder’s grave. Thanks to all of you who were there with Cheryl and me. Peder was pleased.” (The group joining the Reagans included several of his Post 8870 Comrades and high school classmates of Peder and Mike. For those of you who may not know the story, ask Mike the next time you see him.